A few weeks ago, I had the opportunity to view a total solar eclipse.  My sister happens to live right in the path of the totality, so a bunch of us drove to her house and made a weekend out of it.  It was pretty fantastic and pictures don't really do the firsthand experience justice.

But the reason I mention that is because this was the first occasion in a very, very long while that I spent an extended period of time surrounded primarily by Mormons.  And there were some interesting conversations.  The one that irritated me the most was between my sister and her friend.

Her friend mentioned that the moon's orbit is slowly changing and that in thousands of years, total eclipses won't happen.  The moon will be further away from us and it will appear smaller to our view, which means that instead of totally eclipsing the sun, the moon will only be able to blot out most of it.  This is a fascinating comment to make, and it was, up until that point, an engaging discussion.

Since this is only going to be a problem in thousands of years, he continued, by then it won't matter to us.  Finishing his thought, my sister agreed that, by that point in time, we'll just be able to design our own solar systems to make eclipses happen exactly how we want.

Which made me immediately think of this infuriating entry in the Mormon Newsroom's frequently asked questions: 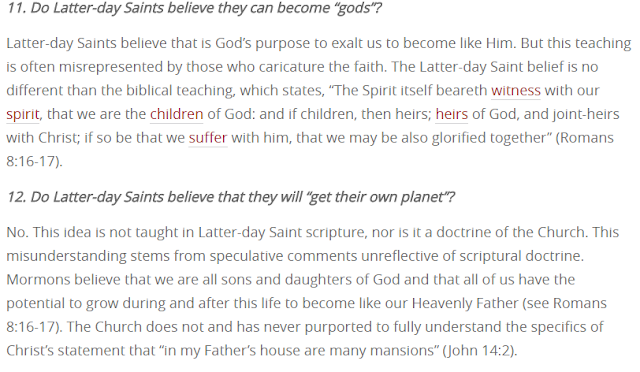 It's a flat-out "no" on the whole becoming-gods-and-designing-planets thing, huh?

For a church that seems so obsessed with controlling information and standardizing its teachings, it seems kind of weird that so many lifelong, doctrinally educated members don't realize that, apparently, they won't become gods or get their own planets.  The church leadership has sent letters to local authorities to make sure members know what kinds of sex they're allowed to have and to appeal for members to combat specific laws that may go into effect.  And Elder Nelson used his fifteen minutes in the last general conference of the church to deliver a semantics lesson.  But somehow, in the last 187 years, the prophets have never bothered to clarify exactly what will happen to us if we attain exaltation in the afterlife.

That is not being very honest in your dealings with your fellow men.