How Mormonism Stunted My Social Development

I am socially awkward.

Everyone who knows me knows this.  My coworkers mock my awkwardness.  My girlfriend tells me that it's her least favorite thing about me.  My few friends express frustration when I refuse to join them in the company of people I don't know.   I am in a constant struggle to relate to and interact smoothly with every person I meet who I don't know well and many people that I do know well.  My awkwardness is almost legendary.

I considered titling this post "How Mormonism Made Me Socially Awkward," but that didn't seem quite right.  I believe that the way we develop depends mostly on two things--what happens to us and how we react to what happens to us.  With most things concerning Mormonism, I reacted poorly to my circumstances and exacerbated the problems that were thrust upon me.  I don't intend to blame Mormonism for every negative aspect of my life, but I do blame it for the circumstances which initiated many of those aspects.

So, instead, here is How Mormonism Stunted My Social Development.

As an exercise, allow me to list the differences between a chapter of Isaiah and a chapter of 2 Nephi.  Here are the things that Joseph Smith's divine inspiration caused him to change from the King James version of Isaiah chapter 4:

Verse 4
-removed a comma after "judgment"

Verse 6
-removed the word "for" before "a covert"


How much of this was important?  I'd be willing to bet none of it.  Of the twenty-one changes I caught in my side-by-side comparison, twelve of them were inconsequential punctuation changes.  The few words that were added or removed were not central to any of the ideas being conveyed in this chapter.  Even the pluralized subject in verse 3 doesn't change the meaning of the scripture--it's more stylistic than anything else.  The adding of the words "of Zion" in verse 5 doesn't serve much purpose, either, as I would have expected that phrase to be about Zion anyway because of its context.

So in case nobody's clear on the argument that I've been trying to make for several chapters now, there was no point in copying large chunks of Isaiah into the Book of Mormon except to serve as filler, to pad to the word count, or to lend credence to the Book of Mormon by linking it to the Bible.  This is not a superior translation.  It is the same translation with slightly altered details.

And when I say there was no point, I mean to say that I have concluded that the Isaiah sections of the Book of Mormon are evidence of the book being the words of a man and not the words of God.

They're also easily the most boring parts of the Book of Mormon.  (Yes, worse than Omni.) 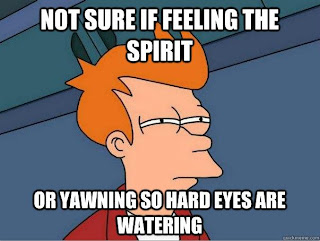 Read more »
Posted by Alex at 4:01 AM No comments: Links to this post

When I was a member of my ward's Teachers' Quorum, my quorum adviser told us a story once concerning the law of chastity that really stuck in my memory.  And because of a casual conversation at work a few nights ago, I revisited that memory and discovered--not for the first time--that something I'd been taught in church was utter crap.

Read more »
Posted by Alex at 6:50 PM No comments: Links to this post

In an email she sent out to the family this week, my sister mentioned a charming story about her two-year-old son.  She said that he liked the primary song "Follow the Prophet" and that he'd been wandering around the house most of the day singing it.  Apparently he got the melody down pretty well but his pronunciation left a little to be desired.  She said that his vowels were mostly right but that he seemed to use whatever consonants he felt like, making the whole song sound like complete, adorable gibberish.  I didn't find the story particularly adorable.

Continuing with his Isaiah-fest, Joseph Smith lifts the entirety of Isaiah chapter 3 for his own records.

I would like to know why Nephi felt the need to quote so much Isaiah.  Considering that he was etching these words into metal plates, you'd think he'd have been a little more economic about what he wrote.  Why labor over words that are already preserved in another record?  Not only is there a record for his people (you know, the one he's copying from), but there's going to be a Bible for everybody else later--a fact you'd think God would have revealed to him.

I suppose you could make the argument from a Mormon perspective that the Bible has been vandalized--that evil men have altered the texts over the centuries and removed "plain and precious truths" from the Bible (Joseph Smith: A Master of Textual Efficiency).  But if that were the true purpose behind the Isaiah sections in the Book of Mormon, why are the only differences between 2 Nephi 13 and Isaiah 3 punctuation changes and slight re-wordings that don't change the meaning in any significant way?

Posted by Alex at 1:41 PM No comments: Links to this post

There's not really much here.  It's a nearly-identical transcription of Isaiah chapter 2, with a few extra words thrown in to make it seem like there was a point to its reproduction.  It's more filler that imparts very little of importance over its repetitive, poetry-embellished 22 verses.

I don't really have anything to say about this chapter beyond that, but I'm discussing each chapter, so I can't just skip it.
Posted by Alex at 1:23 PM No comments: Links to this post

Chapter 11 is only 8 verses long, and it's pretty light on the earth-shattering doctrines.  But there are two things about this chapter I'd like to mention:  revelation and the mess that is verse 7.


No More Revelation
In verses 2 and 3, Nephi mentions that both he and his brother Jacob have physically seen Jesus.  Nephi and his brother were among the spiritual leadership of their society.  But this bold, direct claim stands in contrast to recent actions of the current church leadership.  When is the last time a Mormon prophet explicitly claimed to have a face-to-face meeting with a member of the godhead?  And let's not forget the change to chapter 14 of Gospel Principles which describes an Apostle as being "a special witness of the name of Jesus Christ," implying that an Apostle is not a physical eyewitness of Jesus Christ's existence.

This is reminiscent of a part of the Joseph Smith story--young Joseph was told by local religious leaders that he could not have seen a vision of God because there are no more visions or revelation in the modern age.  But a church that teaches that divine revelation is just as alive today as it was in the Bible is suspiciously shy of addressing the subject directly.

1.  "If there be no Christ there be no God"
Isn't it the other way around?  Besides, there are plenty of religions that teach belief in a supreme being and don't teach of Christ.  This is not the strongest case you can make for the existence of Christ.

2.  "If there be no God we are not, for there could have been no creation."
This is far from an original argument, but I guess I'll cut Nephi some slack, considering he was writing it in 600 BC.  Smith does not get the benefit of the doubt, because I'm pretty sure this was an overused concept even in 1830.  But what I really dislike about this sentence is its connection to the previous claim.  The objective here is to claim that if there was no Christ we wouldn't exist, therefore Christ must exist.  This is horrible logic.

3.  "There is a God, and he is Christ"
Wait...I thought Christ was the son of God.  This is pretty important to Mormon Doctrine--they don't buy into the whole Trinity thing.  I've heard apostles (I want to say...Russell M. Nelson in particular) explain things like this away by saying that "god" is a title and even though God is our God, Christ is also a god.  This is a sloppy, hair-splitting, retrofitted teaching.

Pretty much what happened here was Joseph Smith made some outlandish claims and tried to pass them off as logic, and then he proceeded to destroy his own church's doctrines about the nature of the godhead.

Good going.
Posted by Alex at 10:58 PM No comments: Links to this post

I had a day off, and I had three hours during which I was not in a Mormon meetinghouse, so I spent the time as wisely as I thought possible:  I went to QuickMeme.com and starting making fun of Mormonism.  What better way is there to spend a Sabbath?

Read more »
Posted by Alex at 12:00 PM No comments: Links to this post