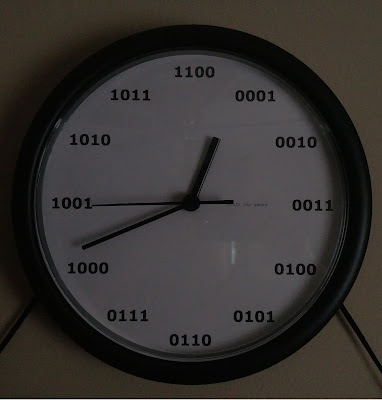 This hangs on the wall in my apartment.

It doesn't function as a timekeeping device because I have plenty of phones, computers, microwaves, stoves, and coffee machines to tell me what time it is.  Also I keep forgetting to change the batteries.  But it serves an important function to me even when it's not ticking.

I first learned of a binary number system (and octal, and hexadecimal, and basically any non-base-ten system) in high school, maybe five years before my eventual disaffection from the LDS church.  It took some doing to wrap my brain around how to manage numerical values with only ones and zeroes, but once it clicked I was absolutely flabbergasted.

Binary numbers are shockingly similar to the base-ten numbers I'd been using my whole life.  There's no mysterious, incomprehensible force at work behind them.  They can express all the same values and they follow the same rules (except without using 2 through 9).  It's just that many of those rules were rules I'd followed without stopping to really understand the mechanisms behind them.  I'd never thought to interpret some of those rules in such a different way before.  So many things about using numbers—about things as fundamental as counting—rearranged themselves in my brain in newly three-dimensional ways.  It was astonishing.  I'd learned more about how numbers worked by delving deeper into the details and acquiring new knowledge about what I'd previously taken for granted.

A few years later, when I was discovering the contradictions inherent to church doctrine, I experienced a similar—if more lengthy—realization.  The mechanics of life hadn't changed.  I was still bound by all the same physical laws and practical limitations, but so many familiar things were suddenly visible from different angles.  All these freshly discovered concepts and ideas and possibilities had been there all along, hidden somewhere between the cross-sections of reality I'd allowed myself to see.  All it took to uncover the concealed potential in the world was the willful ability to examine it from a new perspective with an adjusted set of expectations.  I learned more about myself and my life by delving deeper into the details and acquiring new knowledge about what I'd previously taken for granted.

And that's why I like to keep that stupid clock.  It's a daily reminder that it's worth looking at familiar things in new ways.  That numbers and lives can both be expressed and understood through a variety of valid methods.  That searching for unknown vantage points broadens our horizons in ways that can be enriching and illuminating.

There's a corny joke among computer scientists that there are 10 types of people in the world:  those who understand binary and those who don't.  As far as my ability to grasp new perspectives goes, I always want to be the kind of person who understands binary.

Hence the clock on my wall.  It's not working right now.  But in another sense, it functions perfectly.
Posted by Alex at 8:48 AM