The Run-On:  Part II
It turns out that the ridiculous run-on sentence in the previous chapter was actually supposed to be some sloppily-constructed cliffhanger.  Nine verses and a chapter break later, we finally learn the contents of the decree made by the king of the Lamanites:  "Don't hurt Ammon or his brothers, just let them do their jobs."

Of course, it took three verses to say that because Book of Mormon diction is suspiciously similar to Old Entish. 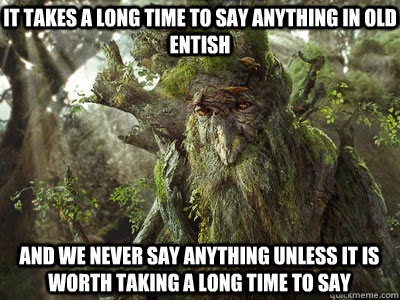 Freedom's Just Another Word For...Wait, What?
The chapter heading begins by stating that "religious freedom is proclaimed" in the Lamanite kingdom.  But let's look at the king's reasoning for his license-to-proselytize decree (verse 3):

To be fair, this is closer to an official state church than it is to actual religious freedom.  The Lamanite king, in the hopes of converting his people to his new religion is not only ordering his people not to persecute God's missionaries, but he's also going so far as to tell them that the missionaries "should have free access to their houses, and also their temples, and their sanctuaries."  It's a government-sponsored Mormon invasion.

And beyond that, there isn't much to indicate that the Lamanite nation didn't already have a decent amount of religious freedom.  Chapter 21 mentions the inclusion of Amalekites and Amulonites in the Lamanite city of Jerusalem.  In verse 4 of that chapter it is stated that "many of the Amalekites and the Amulonites were after the order of the Nehors."  Many, but not all.  Nehor taught "that which he termed to be the word of God" in Alma Chapter 1, but when Ammon talks to Lamoni about God, Lamoni is unfamiliar with the concept (Alma 18:24-25).  That means that Lamoni, with his belief in the Great Spirit, is not after the order of Nehor.  Which means we have at least two separate religious beliefs in the land of the Lamanites.

That, combined with the fact that the followers of Nehor in Jerusalem built "synagogues" and the king's orders that Ammon and his brothers be welcomed into Lamanite "temples" and "sanctuaries" seems to imply that there were already a number of varying religious groups in Lamanite society.

Which means that the king's bold, forceful support of Ammon's religion is actually affording his country less religious freedom.  Not more.

Talk About Groupthink
This chapter summarizes the results of the subsequent missionary effort among the Lamanites.  None of the Amulonites joined the church.  None of the Amalekites joined, either, "save only one."  But half a dozen cities are listed in which the Lamanites "did repent and come to the knowledge of the truth, and were converted."

Entire cities converted.  Entire ethnic groups refused.  This is absurd.  People don't act like that.  Even the Mormon church can't manage to vote as a completely unified bloc, so why do they expect us to believe that conversions of the Lamanites break down into such distinct groups?

The Anti-Nephi-Lehies
The name is so silly-sounding, it serves as a sarcastic section header all by itself.

The newly converted Lamanites decide on a new name for themselves to distinguish them from the cousins they're so much better than now.  They decide on "Anti-Nephi-Lehies," which is totally confusing, because that makes it sound like they're against the good guys.  My seminary teacher explained to us that "anti" means "facing," but in retrospect I'm pretty sure she just made that one up.

Anyway, these people instantly become awesome and totally unlike the lazy, bloodthirsty savages they used to be:


And they began to be a very industrious people; yea, and they were friendly with the Nephites; therefore they did open a correspondence with them, and the curse of God did no more follow them.

The curse of God that no more follows them couldn't be referring to the color of their skin.  Not only would that be incredibly racist of God, but it's also not supported by the famous painting of them that every Mormon kid has seen in Sunday School:

Ironically, if they were joining the supposedly not cursed Nephites, they were taking part in the Nephite double-or-nothing gamble:  sure, they could be God's favorites, but if they ever screwed up, they'd be in worse shape than if they were just evil godless Lamanites in the first place.

Although they seem to hold up their end of the bargain later, so I guess the gamble pays off.
Posted by Alex at 11:42 PM