Alma 18: Ammon is Pretty Much Awesome

Apparently impressed by Ammon's one-man-arm-severing-army trick, King Lamoni decides to sit and listen to what the missionary has to say.  Because unadulterated violence is usually the best way to get an investigator to take the church's truth claims seriously.


Ammon is Pretty Much the Greatest Guy Ever
As King Lamoni hears the reports of his servants, stares at the pile of arms they brought as proof, and worries that Ammon is the embodiment of the Great Spirit come to punish him for executing his servants previously, Ammon himself is absent.  King Lamoni asks where this enigmatic invincible man is.


And they said unto him:  Behold, he is feeding thy horses.  Now the king had commanded his servants, previous to the time of the watering of their flocks, that they should prepare his horses and chariots....

I remember one of my church teachers going on and on about this verse.  I'm not sure if it was in seminary or in Sunday school, but this teacher was so impressed with the humility Ammon exhibits by continuing to do his job even after he'd done something that attracted so much attention.  But the story isn't necessarily about humility.  It's kind of about an emotional detachment from the act of taking a human life. 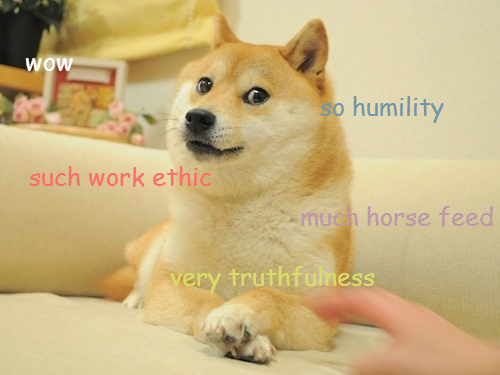 Ammon is Pretty Much the Most Spiritual Guy Ever
When Ammon finishes his chores, he stops by the throne room (or whatever) and asks what else the king wants him to do.  Filled with awe and fear (because he still thinks Ammon is the Great Spirit and he doesn't want to piss him off), King Lamoni doesn't answer him for more than an hour.  Then Ammon exercises his spiritual prowess in a truly remarkable way:

And it came to pass that Ammon, being filled with the Spirit of God, therefore he perceived the thoughts of the king.  And he said unto him:  Is it because thou has heard that I defended thy servants and thy flocks, and slew seven of their brethren with the sling and with the sword, and smote off the arms of others, in order to defend thy flocks and thy servants; behold, is it this that causeth thy marvelings?

That's not the Spirit.  That's just common sense.  You don't walk into work with a jellyfish stuck to your face and then ask people if they're staring at you because of your new haircut.

"Oh, is it because I just pulled the most violent, over-the-top feat of strength and daring you've ever heard of that you wanted to talk to me?  Because if this is about the dent in that one chariot, it was like that when I found it."

What's even worse is that, two verses later, Lamoni falls for it, realizing that Ammon could "discern" his thoughts.  Come on.

Ammon is Pretty Much the Most Harmless Guy Ever
Lamoni promises Ammon whatever he wants in exchange for an explanation of how he did all that crazy stuff he did.

Now Ammon being wise, yet harmless, he said unto Lamoni:  Wilt thou hearken unto my words, if I tell thee by what power I do these things?  And this is the thing that I desire of thee.

Ammon being wise, yet harmless?  That's clearly a lie.  Did anyone else even read the previous chapter?  He killed seven guys without even firing a warning shot!  He's a mass murderer!  A spree killer!  He is not harmless!

Ammon Bears Pretty Much the Most Powerful Testimony Ever
At King Lamoni's urging, Ammon gives him the rundown of life, the universe and everything.  He explains God, he explains that the Spirit gave him the power to kill people at his whim (because that's a good thing), he explains the fall of man, the plan of redemption, and even the history of their home continent, including the bit about how King Lamoni's ancestors were wicked and were therefore dealt a hefty curse.

King Lamoni's reaction can be likened to  Alma the Younger's reaction to the angel that appeared to him in order to add another dramatic recurring story to the list of Book of Mormon tropes:
Lamoni cries out a request for God's mercy and then keels over.  Everybody thinks he's dead.  Apparently this is a credit to the power of Ammon's testimony?  Or perhaps it's supposed to be indicative of the depth of Lamoni's newfound faith?  Or maybe it's just a way to convince the people that Ammon is for real because it allows Lamoni to come back to life miraculously?  Whatever the reason, it sounds pretty corny.  It sounds like the kind of thing a bad writer does simply to make his subject matter seem more important.  It sacrifices realism and credibility in exchange for some dramatic weight.  Kind of like Nephi cutting off Laban's head and Alma letting his followers burn in Ammonihah.

There are better ways to tell this story.  But this way has so much punch to it!
Posted by Alex at 1:14 AM