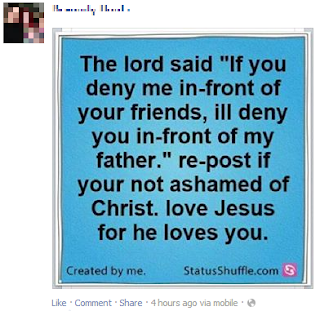 I found this little gem in my news feed yesterday.  Ugh.

This wasn't posted by a Mormon, but it struck me as having a similar logical flaw to the Mormon concepts of God and Jesus.  This depicts Jesus as being simultaneously vindictive and loving.  It demonstrates how he supposedly holds your salvation for a ransom of love.  It's ludicrous to suggest that a perfect being who lived without sin could be capable of that.  It's also absurd to suggest that someone loves us unconditionally if he delivers ultimatums like this one.

All that, combined with the fact that the numerous grammar and punctuation errors make the originator of this graphic look quite foolish, makes me think that this is the work of a troll.  My theory is that some atheist/agnostic/anti-religious guy decided to make a little quote and hoped that lots of religious people would share the crap out of it without realizing how silly it is.  It kind of makes me want to do something similar for circulation in the Mormon Facebook community.

What would a Mormon version look like?  I don't have many Mormon friends on Facebook, and the few that I do keep are not the gushy, post-every-day-about-how-Mormon-I-am type, so I haven't seen much in this vein from them.  But I have a few ideas:


I'm sure there are almost endless ways to subtly lampoon Mormon logic.  Unfortunately, as amusing as it would be to see how many Mormons unwittingly share their religion's foibles on social media sites, it wouldn't accomplish anything.  I wish they could perceive the problems instead of promulgating them.
Posted by Alex at 7:29 PM