Mosiah 18: The Church of Alma

Previously on The Book of Mormon...

Abinadi struggles heroically against the two burly guards who are restraining him.  "I will never renounce the gospel of Jesus Christ!" he cries passionately.

"Then you will die," growls the morbidly obese King Noah from his shadowy throne.  The evil high priest Alma looks on with an expression that betrays his inner conflict.

"I don't even know who you are anymore," the king replies darkly.  "Get out of my sight."

Bound and helpless as his body is engulfed in flames, Abinadi shrieks, "The fruit of your loins will burn for this treachery!"


A Broken Line of Authority
Alma begins a campaign to undermine Noah by secretly preaching the gospel to his subjects.  Eventually, he welcomes his growing number of followers to the waters of Mormon to baptize them.  Then, as he and Helam are in the water getting ready for the baptismal ordinance, Alma prays for and is immediately given the authority to baptize.  Wirelessly.  No laying on of hands, no setting apart or ordaining.  Just bam—instant authority.

In a curious complication of events, two thousand years later, after the authority to baptize had again been lost, it required a long-deceased possessor of that power to appear to Joseph Smith and manually transmit the authority to him.

So either Alma's or Joseph's receipt of priesthood power was a lie or God works in very mysterious (by which I mean illogical) ways indeed. Although, my money is on Alma making his legitimacy up, because it's implied by verse 15 that he also baptized himself.  If that's not shady I don't know what is.


The First Home Teaching Program
Alma then began establishing a leadership structure for his church, ordaining one priest for every fifty members.  Not only does this chapter imply a more military hierarchical structure than the "organization that existed in the primitive church," but it also illustrates that priests were little more than church-sponsored naggers whose job it was to poke their fifty people in the arm every once in a while and remind them to repent.

Alma ordered that his priests were to preach to the people (verse 18).  But he also required that they only teach the things which Alma and the other prophets had taught (verse 19) and further clarified that they were expected to teach nothing other than repentance and faith (verse 20).  That sounds to me like the priests were simply home teachers.  Once a month, they'd knock on everybody's door and say, "Have you done your repenting today?" and "Don't forget to believe in God!"


Donation Without Coercion
Even if his priesthood organization was a little silly, Alma seemed to have a few good ideas about wealth.  Verses 24 and 26 stress the importance of the priests supporting themselves instead of relying on the members to pay their living expenses.  Even more interesting, however, are verses 27 and 28:

And thus they should impart of their substance of their own free will and good desires toward God, and to those priests that stood in need, yea, and to every needy, naked soul.

I think this sounds like a far cry from the modern church's tithing system.  It seems like Alma is saying that donations are expected of the people, but how much each member offers is up to his discretion--with the understanding that the system is in place to help the less fortunate among the congregation.  This doesn't sound like a flat fee of ten percent regardless of financial difficulties.

I don't think Alma was holding tithing settlements to hound his members about whether they paid exactly how much they were supposed to.  I don't think he was building malls and temples.  I don't think he was using the donations to fund a lavish lifestyle for himself and his family.  I think he was just asking his followers to give whatever they could so that their excess wealth could be redistributed among the members of the church who needed help.  That strikes me as a much more harmonious, Christlike system than the system currently utilized by the LDS church.
Posted by Alex at 5:44 PM 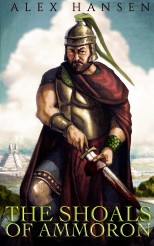