This section should be subtitled "Quit Asking Questions, Dingus."

God Blows Off Some Steam
Our favorite deity vents his frustrations a bit in verse 8:

Oh, this unbelieving and stiffnecked generation—mine anger is kindled against them.

God's constant kvetching about his children's iniquity irks me.  He made us and he set the standards for us, so don't our shortcomings reflect the imperfections of his creation?  And other than some outliers like the City of Enoch and the generations of Nephites who lived immediately after Christ's visit, isn't God almost always wringing his hands about how gosh-darned sinful we are?

If a child continuously and willfully misbehaves, there's a certain point at which you have you wonder whether the kid isn't necessarily a brat but maybe poor parenting is unwittingly nurturing the brattiness.  But this takes it to another level, because God designed the reality in which we so persistently disappoint him.  So this is like chopping your kid's leg off at birth, forcing him to train as a long-distance runner all through his adolescence, and then getting mad at him when he doesn't qualify for the Olympics as an adult.  I mean, sure it's possible he could have done it, but the expectation is completely unreasonable, especially considering the severity of the roadblocks that were put in place by the same person imposing the expectations. 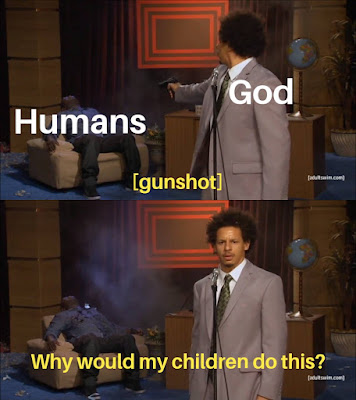 But, sure, God, by all means, keep whining and go on pretending like all of this isn't primarily your own failure.

When is a Witness not a Witness?
If you've got your birdwatching binoculars on, I'm sure you spotted a rare Northeastern Ruffed Contradiction in verse 14:

And to none else will I grant this power, to receive this same testimony among this generation, in this the beginning of the rising up and the coming forth of my church out of the wilderness—clear as the moon, and fair as the sun, and terrible as an army with banners.

God has just finished telling Joseph that he's going to let him show the plates to three people.  In this verse he seems pretty clear about the fact that nobody other than these three witnesses will be permitted to see the ancient records from which the Book of Mormon was translated.  That makes it kind of peculiar that we were later given eight more witnesses.  Did God change his mind?  Did some divinely unforeseen development necessitate additional witnesses?

Also—and this is more a curiosity than a criticism—why is it the banners that make an army so terrible?

Holy Manipulation, Batman
Joseph moves on to using fear and the supposed power of God to keep Martin Harris in line.  In particular, look at verses 23 and 24:

And now, again, I speak unto you, my servant Joseph, concerning the man that desires the witness—

Behold, I say unto him, he exalts himself and does not humble himself sufficiently before me; but if he will bow down before me, and humble himself in mighty prayer and faith, in the sincerity of his heart, then will I grant unto him a view of the things which he desires to see.

Although God's tenuous grasp of English grammar (that vs. who, which vs. that) is annoying, my biggest problem with this passage is the sly move Joseph is trying to pull here.  It also may have set a precedent for how Mormonism treats questions.  When someone asks for a sign or for—dare I say it—a practical corroboration of concepts for which they have exercised faith, the response here is not to provide proof, but to immediately attack the person's motives.  How dare you want to get a little extra peace of mind about this possibly fraudulent endeavor that you're sinking heaps of time and money into, Martin?  Stop being so prideful! But, oddly, the witness Martin is being chastised for desiring can be given to him if he asks in humility.

I suppose that is supposed to teach that it's the way the witness is requested that was the problem, not the request itself.  But that sends some mixed messages, considering that we use the story of Korihor to preach against asking God for signs (Alma 30:44):


But Alma said unto him: Thou hast had signs enough; will ye tempt your God? Will ye say, Show unto me a sign, when ye have the testimony of all these thy brethren, and also all the holy prophets?

But maybe that's not entirely fair since, at this point in the historical timeline, Alma hasn't been translated yet—although God surely already knows what the Book of Alma will contain.  So regardless of any theoretical conflict with later Book of Mormon verses, it sure seems to me like God is tearing Martin Harris a new asshole because he wants proof while also dangling the possibility of that proof in front of him to keep stringing him along.   Which seems like a very human form of manipulation, not like a course of action indicative of a loving, perfected deity.

And I the Lord command him, my servant Martin Harris, that he shall say no more unto them concerning these things, except he shall say: I have seen them, and they have been shown unto me by the power of God; and these are the words which he shall say.

But if he deny this he will break the covenant which he has before covenanted with me, and behold, he is condemned.

So, under threat of eternal damnation, Martin is not to elaborate on any golden, plate-like historical relics he may be shown. He is also not to share any doubts, questions, or unapproved observations on the matter. He is only to tell the public that God revealed them to him and that they're totally legit, and then he is expected to end the press conference without opening it up to any questions.

Why? If it's all real, what does Martin or Joseph or God have to fear by going into more detail about the plates? What does God risk by allowing Martin to describe the dimensions, the weight, and the color of the plates or to share some of the characters inscribed on them? If all of this is legitimate and not a fraud in any way, what devastating ammunition could Joseph's critics find in Martin's statements that they wouldn't have been able to come up with before?

Of course, if this is a scam, then what God's saying here makes perfect sense—especially the threat of condemnation to make sure Martin doesn't overstep his bounds and say something that could be used as evidence that he was duped by a glass-looking con man.
Posted by Alex at 3:33 PM