Standing with Paris, Standing for Peace 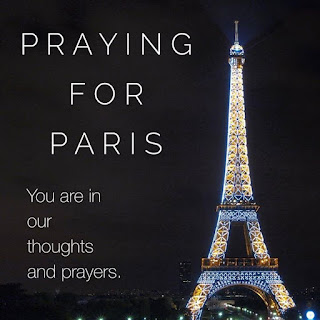 Scrolling through my Facebook news feed the morning after the horrific terrorism in Paris, I found myself both encouraged by my fellow human beings and a little disappointed in them.

The number of people who have changed their profile pictures to be superimposed on a French flag is nice to see.  The various hashtags being plastered across the internet (#PrayforParis, #JeSuisParis, #solidarity #StandwithFrance, etc.) are inspiring.  In the wake of such an abhorrent and senseless tragedy, I feel proud when I see so many of us from so many different backgrounds send our condolences to those affected by the violence. 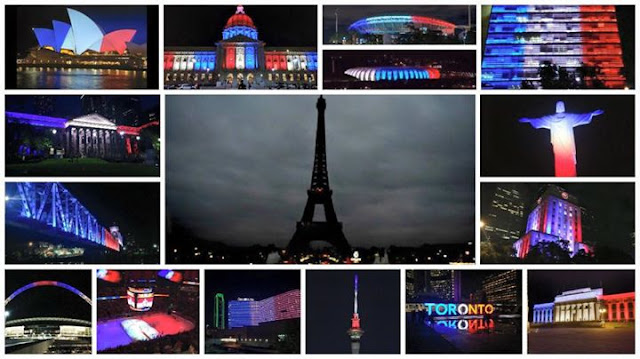 But there have been other kinds of reactions.  There are some people, also from various backgrounds, that are a little too eager to insert their own ideologies into what should be a time of mourning. 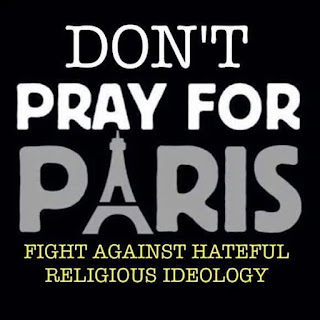 I'm not religious.  I don't believe in a god.  And even though I don't think praying accomplishes anything directly, I don't think we should pretend that it doesn't show support to the families and the countrymen of the victims.  The number of people on social media proclaiming their intent to pray for Paris is truly staggering, and I think it's a respectful acknowledgement of Parisians' suffering.  I don't think it will solve the problem, but it's pretty much the same as saying, "you're in our thoughts" or "you have our condolences."  While hateful religious ideology seems to be the cause for these crimes, telling people not to pray and not to express support in a way that is meaningful to them and to many of those affected seems like focusing on the wrong thing. 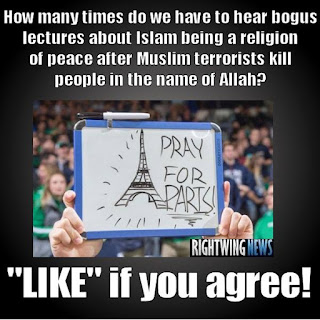 No religion is wholly a religion of peace for the sole reason that every group has its extremists who take things too far.  Yeah, it was Muslims destroyed the World Trade Center and Muslims who attacked Paris last night.  But Christianity perpetrated the Crusades.  My own religious heritage, Mormonism, was responsible for the Mountain Meadows Massacre in 1857, which resulted in the deaths of at least 100 civilians.  But I'm not about to say that Mormons are bloodthirsty or Christianity is a religion of violence.  The actions of a few followers of Islam should not be used to extrapolate the beliefs and behaviors of all Islam.  There are some violent things in the Quran.  There are some violent things in the Bible.  There are some violent things in the Book of Mormon.  But Muslims, Christians and Mormons aren't universally violent people.

It's blind hatred that drives this conflict.  Stoking the fire of hatred in the immediate wake of an act of hatred will only lead to escalation.  What we need is compassion and empathy, not vitriol and rage.  Compassion doesn't win wars, but it does inspire peace.

What matters most about all this is that we're all human beings.  Those of us outraged by the violence, regardless of our religious background, should stand together, support France, and do our best to find justice.  Pointing at Muslims and telling them their religion isn't peaceful isn't going to help anyone—especially since a lot of Muslims will agree that the attacks are tragic and that terrorism needs to be stopped. 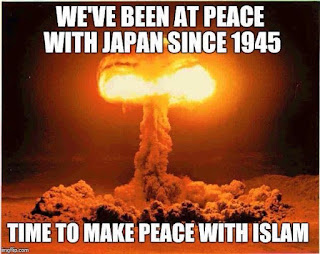 And this is the worst image I've seen all day.  It's true that we've been at peace with Japan since 1945.  But that came at a heavy cost.  Almost a quarter of a million people, mostly civilians, were killed by the bombings of Nagasaki and Hiroshima.  Arguments can be made that more people would have died had the war not been ended so decisively, but I for one would rather not repeat one of the most uncomfortable decisions in my nation's history.  Nuking the crap out of "Islam" instead of targeting the terrorists who happen to believe in Islam would be a mistake.  Glorifying the deaths of thousands upon thousands of Japanese and suggesting the same should be visited on Muslims is cruel. 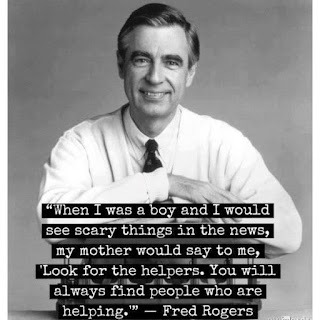 Let's focus on this kind of thing.  Let's focus on the good.  Let's observe how well those of us who oppose the violence can unite.  There will be a time for arguing over what foreign policies may or may not have allowed these awful things to happen and how those policies should be adjusted.  But for now, this is what I hope to see from my species:

Let us not be so involved with our own beliefs that we can't appreciate the good intentions of others' beliefs.

Let us not feel so wrapped up in our own country's problems that we can't help but to politicize tragedies in another.

Let us not be so angry that we aren't careful about how constructive our anger is and discerning about who it's directed against.

Let us not get so carried away in our grief and our indignation that we become eager to inflict similar grief and indignation on our perceived enemies.

Let's just...stand with Paris.  Let's offer them our support.  Let's pray for them.  Let's mourn with them.  Let's show respect for the families who have lost loved ones.  And then let's help the peaceful peoples of the world find a way to put a stop to the violence.
Posted by Alex at 4:38 PM