Because of some crazy masochistic compulsion, I decided to spend a little time browsing FairMormon's website.

I wasted way too much time perusing their rebuttals to the CES Letter.  While plenty of their points are reasonable, too many of them are annoyingly obtuse.  For example, in the section addressing the problematic presence of chariots in the Book of Mormon, Fair's response makes this statement:  "Conspicuously absent is any role of the chariot in the many journeys recorded in the Book of Mormon."  But if you scroll up about half an inch, you'll see that, in the summary of every mention of chariots, in Alma 20, a "Lamanite king uses horses and chariot for visit to neighboring kingdom."  That's not a journey in which chariots were used to transport either goods or passengers?  And even if chariots aren't connected with travelling in the Book of Mormon, that doesn't address the central issue, which is that chariots (and draft animals to pull them) did not exist in America during Book of Mormon times.

Surely it's this kind of flawless reasoning and impeccable scholarship that give FAIR its reputation for integrity.


The argument against anachronistic references to steel is mind-blowing in its ability to ignore the crux of the issue: 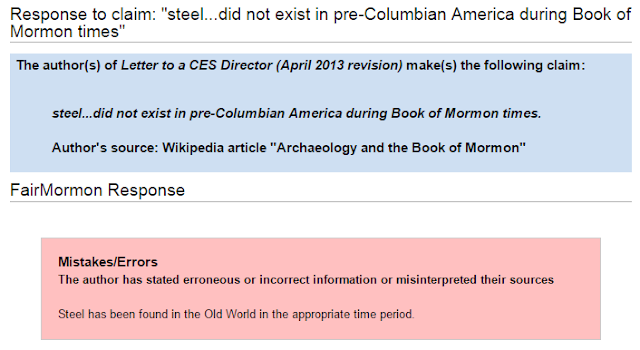 Jeremy Runnells says that ancient America didn't have steel and Fair says he's made a mistake because...wait for it...places that weren't America had steel at around the same time.  This, of course, still ignores the central problem that, even if Old Worlders were making steel, there's still zero evidence that it was available to the civilizations depicted in the Book of Mormon.  And zero evidence seems like a pretty big deal considering the millions of Jaredites who killed each other with their steel swords.


But when it comes to addressing the Limited Geography model, Fair outdoes itself: 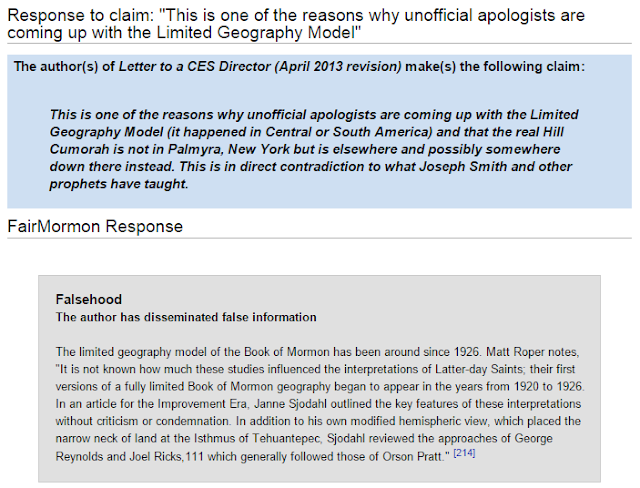 So when Mr. Runnells discusses where the events of the Book of Mormon might have taken place, what does Fair do?  They zero in on what they apparently perceive as an offensive verb tense and throw multiple detailed resources at us only to make the point that the Limited Geography Model is not a new concept.

First of all, Runnells used the present progressive tense, which doesn't necessarily mean that he thinks the Limited Geography Model is new.  It just means he considers it to be currently developing, which is completely true.

Secondly, Fair does nothing to address the final sentence of Runnells's quote:  "This is in direct contradiction to what Joseph Smith and other prophets have taught."  Remember that time Joseph Smith came across some bones in Illinois and declared them to be from a Lamanite warrior named Zelph?  This is the kind of thing Runnells was talking about.  So while Fair zeroes in on the wording and proclaims Runnells to be disseminating false information, the Zelph thing goes totally unaddressed.


The biggest problem with FAIR's rebuttals is that a lot of them rely on compartmentalizing the arguments.  For example, when Runnells suggests that the direct quotes from the Bible in the independently translated Book of Mormon constitute evidence that Joseph Smith was copying from one book of scripture to create a new one, FAIR says that none of the scribes ever mentioned him having a KJV Bible during the translation process and scoffs at the possibility of memorization.  But when the presence of the italicized words from the KJV in corresponding sections of 2nd Nephi and 3rd Nephi, FAIR claims that whether Smith consulted a Bible "isn't really relevant."  These arguments are reasonable on their own but don't jive with each other.

Compartmentalizing the arguments is kind of missing the point of the CES Letter.  The CES Letter's strength is the sheer tonnage of individual problems coming at the reader all at the same time.  As church members, we tend to notice these things one at a time.  It's easier to dismiss problems or take things we don't understand on faith when we're presented with them in small doses.  But the CES Letter brings so many contradictions and errors to light simultaneously that it becomes much harder to brush them off.  I'm badly paraphrasing Runnells when I say that not any individual argument in the CES Letter should be the nail in the coffin for anyone's testimony, but collectively they can crush the illusions.  When FAIR goes through and tries to argue against it line by line, they've demonstrated a remarkable ability to miss the point on a broad, conceptual level.
Posted by Alex at 3:02 PM